I graduated from Queens University of Charlotte earlier this year. 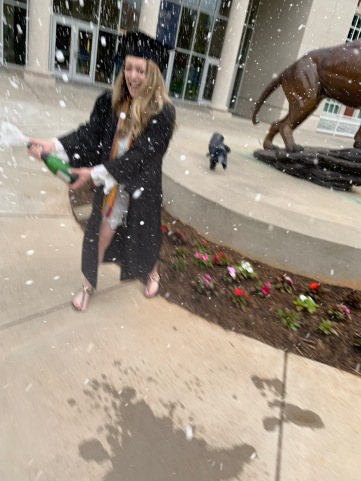 And then on July 6th, Ben and I officially tied the knot.

Let’s back up though. To be completely honest, I knew that moving was imminent and had been planning behind the scenes since April of 2018. Shortly after we got engaged, Ben took a job that moved him to Fort Lauderdale, Florida. We did long distance for the majority of our engagement, and it was looking like I was going to join him in South Florida.

I was not super pumped for multiple reasons. While most of my family was from the area that Ben moved to (my parents got married one street over from where his office was, lol) it did not feel like “home.” Also, I had put a lot of time, energy, and money into building my brand that was focused on Charlotte. How was I going to pivot to capture the attention of a South Florida market?

I kept all of that on the down-low for the majority of my remaining time in Charlotte. Four months before I graduated, we received news that Ben was going to be transferred with his same company to Raleigh. On top of that, he made Olympic Trials for swimming and would train in Raleigh as well. This meant that instead of Florida, we would return to our mutual hometown (which is also wild that I went all the way to Charlotte to meet a guy from Raleigh. Lol, the universe is so weird.) While I was relieved that I would not have to move far from NC and my immediate family, there were now new concerns. Where would we live? How can I adjust my brand to be more than just Charlotte focused? What am I going to do with my degree? UGH.

While balancing the multiple priorities of finishing school, operating my brand, working two jobs, and planning a wedding with my mom, I chose not to let people know what was going to happen. I was going to let the pieces fall where they may.

I ended up taking a full time position with the company I interned for during school, which meant I would still be in Charlotte once every few weeks, sometimes more. However, I was still afraid that once I announced I was gone, my audience would decide to leave believing that I was no longer actively present in the community. But with Raleigh actively growing and gaining recognition for its culinary presence on a national level, it was an opportunity I had to take.

So I decided that on October 2nd, I was going to make the jump. And I was scared, but also excited. Figuring out a name for this new chapter did not come as readily to me as CLTChomp did, so I decided to go with the same name as my website, Chompable. A totally made-up word, but still fun. The morning of the 2nd, at 3 o’clock in the morning, my alarm went off. My plan was to switch CLTChomp with an account I had already created to claim the Chompable handle on Instagram (because I don’t trust people, and I don’t need someone to take CLTChomp in case I were to ever return to Charlotte!) What I didn’t know was that IG has a super convenient feature in place that will not let you switch your handles between accounts. It simply lets you change your username, but will put a freeze on your previous username for 14 days in case you would like to switch back.

But it was go time! I didn’t want to wait, I had to do it now or never! So thinking I would be super smart and free up the handle, I deleted the extra account I made intending to then switch my current account to that name. Uh, NOPE.

Turns out once an account is deleted, the username is forever inaccessible and will forever just float out there on Instagram’s platform. Cue all the expletives! Moral of the story: don’t act like a slick internet hacker at 3 am or else you’ll shoot yourself in the foot like me!

I spent the rest of that day freaking out, trying to figure out how I could turn lemons into lemonade. I talked to other creatives, close friends in the blogging community, called family members, and even my company’s creative director. Ultimately, the next best thing was “chomp.able,” which served as a double entendre. It’s a verb, and a pronoun!

I made the announcement, and it was met with a lovely response from the Charlotte community, which made me feel so much better. However, over the next three days, I lost over 200 followers. I’m surprised the loss was not worse, but I guess the people who chose to bounce didn’t read that I have decided to cover both cities, since I’m back and forth so much. Oh well!

I needed to go ahead and tell the full story, since it came to my attention that even after the announcement people had no idea. And that’s ok, you probably missed the post since Instagram’s algorithm is really f’ed up right now!

In the meantime, I have some very exciting projects coming up, including the third episode of Chomp 101, giveaways and more blog posts. Love y’all, thanks for reading!